Other Blogs by Raindrop

"Tell us about one amazing thing you have seen", I get asked this question many times. It is difficult to answer it. It is more difficult to back it up with a proof because when you are living an amazing moment you totally forget to capture it. The only things common to all these moments are tears and a sense of timelessness.

They are neither the tears of joy now sorrow. Neither are they anchored in surprise, nor wonder. One simply is and cries. I have no words to explain this. No photographs. No videos. Yes I might have alibis who can prove that I was there at that particular time but I am not sure if they saw what I saw.

Here are just a few of the amazing things that I have been mindful (or shall I say mindless) enough to have experienced...

1. There is a mountain next to the Gurudongmar lake in North Sikkim. I think it is called Dorji La. There was just a small post of uniformed personnel on top of it. I stood atop it (would be between 18,350 to 18,600 ft high). On my right was the blue lake. In front of me was a glacier. I am told it is the origin of Teesta river. And on my left were the Tibetan plateaus. Rarefied oxygen, heady scenery and extreme hunger. They made me cry.

2. In the villages of Kanha and Kisli (Kanha National Park) at one end is a forest and at the other agricultural land with nothing but hamlets every few kilometers. In 2006 we were taking one wrong turn after the other when we came across a bare tree in the fields. It had no leaves. But it was lit. It had fireflies all over it. There was a bare tree with a million fireflies in the middle of nowhere on a pitch dark night. Reason enough to switch off the car headlights and take in.

3. There is a small mountain called Mount Loussavarra in the township of Kiruna in Northern Sweden. We trekked up in the middle of the night. Reached on top by 1:00 am. It was bright and sunny. Me and a friend sang "Happy Birthday to you" on top of our voices for our friend Anders. There was just one bench and we sat there. That was the first time I saw the 'Midnight Sun'.

4. In September 2003 I decided to go backpacking. I reached Edinburgh at 5:00am. The bus dropped me outside the tourist office on Princess street. I had few hours to kill before it opened. So I started walking. Reached a church at the far end of the street. It was landscaped in many tiers. Everything was locked except the main gate. I went down flight after flight of stairs. Finally reached a small area which was enclosed from all sides and had a pavement all across the four walls. It had no roof. I decided to read the inscriptions. It was still dark so I read just what I could easily understand. I didn't know what the word 'interred' mean. So I kept walking and reading until I read the word 'buried'. Can never forget the shock. I slowly looked down at my feet. I was walking on connected concrete graves, not a pavement. The half walls were tall epitaphs. It was not an open area, it was an enclosed graveyard. I stood transfixed. And then ran like I have never run. Only when I reached the top and was on the street did I stop for breath. I stood there alone and cried.

5. Singing the Indian National Anthem is something we have done everyday in childhood. It was never a big deal until I sang it at Jawaharlal Nehru stadium in 2010 with 60,000 other people during the opening ceremony of the Commonwealth Games in New Delhi. And you can't even take a break to wipe the tears....they simply flow.

6. The prayers on the banks of river Ganga at Rishikesh are quite enchanting. One sits on the stairs and watches the river go by. People do all sorts of religious things on the river bank. I witnessed the mundan (first haircut) ceremony of a toddler as I sat on the steps reading the verses of Gita with my father on the eastern Triveni Ghat. On the other bank of the river I saw few funeral pyres burning at the same time. It was a live view of the beginning and end of life. Your eyes wander naturally to the river in between that is alive.

7. We were in Zakhama, Nagaland last month. We walked up to the helipad in the night just to check out where it was so that we could come back in the morning with the whole family to see the sunrise. I have never seen a clear sky so full of stars. I looked up. Kept looking. It was like standing under a dome-full of sparkles. Totally spellbound. And then Venus blinked. Twinkled suddenly. So did some other stars one after the other. As if saying 'Hi'. I waved back too :)
Posted by Raindrop at 9:55 AM

Email ThisBlogThis!Share to TwitterShare to FacebookShare to Pinterest
Labels: Travel

Thanks for stopping by :)

Raindrop
Raindrop believes there exists the eighth colour. Until I find it, my existence is just a collection of experiences. 'No regrets' is the epitaph I hope to earn when it's time to go.

'Pick of the Week' from Raindrop Archives 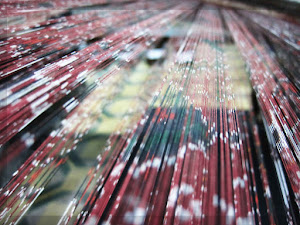 Searching for something on Raindrop?

Thanks for the read :)